It's nearly game time for week 3 of the 2017 MLS season and this year's Portland Timbers have accomplished something that their 2016 team couldn't do - win away from Providence Park. While the team has caromed close to going winless away from Portland in a full season on 3 occasions - 2 road wins in 2011, 1 road win in 2012, 3 road wins in 2013 - Portland tied a rather dubious mark by not winning a match away from the Rose City in 2016. After their impressive thrashing of Minnesota United FC in their home opener, the Timbers traveled to Los Angeles to play the Galaxy in week 2. In 9 previous visits to Stub Hub Center, the Timbers have earned just 1 win and 3 draws, but their 1 win was fairly impressive - a 5 to 2 thrashing back in October 2015 that helped catapult the Timbers towards their dramatic MLS Cup victory. With several injuries affecting the defensive line - no Liam Ridgewell or Vytas available - Portland used an impressive effort by Sebastian Blanco and some timely collective defense to defeat the Galaxy 1 to 0.

What was more impressive about the match was the identity of the Timbers' goal scorer - and it wasn't even his birthday. Diego Chara tallied the lone goal in the 8th minute that actually was started by a Galaxy set piece that the Timbers were able to clear and the ball fell to Blanco, who sent Chara forward on a wonderful forward attack with a wonderfully placed through ball. Chara ran onto the ball, headed it to Diego Valeri in the Galaxy box, and the Maestro drew the defense over to him before slotting the ball back to Chara for the easy tap in. Portland did have a few other chances on the day, but they weren't able to score anything more, but they didn't need it as the collective backline of Alvas Powell, Lawrence Olum, Roy Miller and Marco Farfan collectively held an undermanned Galaxy team to just 2 shots on goal in 13 overall shots attempted. The Galaxy were hurt by the ejection of defender Jelle Van Damme for two yellow cards within moments of each other - the first for dissent, the second for impeding the progress of Timbers midfielder David Guzman - but they scrapped to keep the match interesting. The Timbers were harmed by their own roster adjustment as Guzman had to leave the match with an undisclosed shoulder injury after the play with Van Damme, and he was replaced by Ben Zemanski.

Suffice to say, I was pleased with the result but I wouldn't have predicted this result after the struggles from last year. In my former outlet, we had the weekly exercise of putting together predictions for the upcoming match with a predicted winner, the scoreline and even some thoughts about who might score. Over the years of completing this, I tried virtually every method to come up with my predictions - actual research, asking my cats, using a Magic 8-Ball, consulting a random number generator, using intuition, or just wildly guessing - and I can say that there was no one method that worked better than anything else. I also didn't consult much week to week about my actual picks, so there was a point in the 2015 season when a reader pointed out that after 20 matches, I had predicted 19 wins and 1 draw - probably not the most realistic of records. But I always had fun with the exercise, and it was a source of pride when the actual predictions came true, so in keeping with the new site, I thought it would be fun to bring it back for this year. And this week's opponent, the Houston Dynamo, is undefeated as well, so the match-up is garnering lots of attention.

Each week, I will post the predictions from my crew of expert commentators - and in coming weeks, I will even add other predictions from randomly chosen fans. Think you can beat this expert crew of soccer experts? Well, give it your best shot for pride - as our budget doesn't exactly allow for massive prizes or certificates. 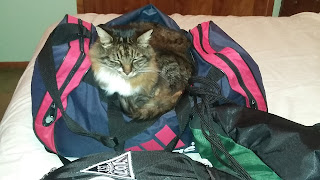 Our first participant is my cat Spot, our eldest female who is a Maine coon that is obsessed with sports bags and magically appearing on a lap without an invitation. When I asked about who would win between Houston or Portland, she said "nyunh" after Houston and nothing after Portland, so I took that as a Timbers win. However, she ignored several attempts to provide a score, which is just like what a cat would do. 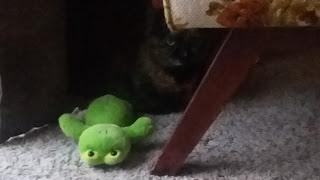 Secondly, we turn to Tortie, our youngest cat who is secretly a ninja that loves frogs. She was probably the most eager to participate, so maybe she knows something. She meowed more about Portland that Houston, and when I asked about goals, she eeped 3 times after the Timbers and 1 time after Houston. So in recapping her entry, it's Portland 3, Houston 1 and it's now time to chase the froggy about the house. 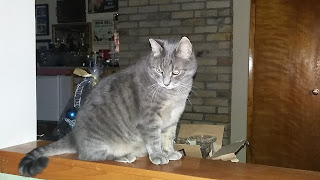 Our third member is the esteemed GB, who is a perpetually hungry but very loving boy that recovered nicely after being shot by a pellet gun when he lived outside. He reacted to both teams positively, and I got 2 head butts after asking about Portland and Houston, so I took this to mean it would be a 2 all draw. Considering both sides are undefeated, this might actually be a smart play for the grey boy. 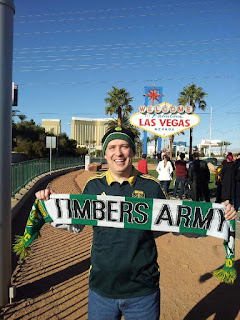 Number 4 is myself, and obviously this is a tough match to call a winner within. Houston and Portland are both strong sides, and the Dynamo has been buoyed by Erick Torres finding his scoring touch & getting support from Romell Quioto. Defensively, Tyler Deric has taken over the goalkeeping and the patchwork backline with Leonardo & A.J. DelaGarza has held up well. The Timbers, however, have been offensively stronger than anticipated, so I'm calling this one as an official shootout. It should be a 5 to 4 result with goals from Fanendo Adi, Darlington Nagbe, Diego Valeri, and even Timber Joey gets one. Unfortunately, the Timbers will concede a few and it will be a track meet.


That's all for this week, so to recap, Spot is predicting a win based upon an unknown score, Tortie is calling for a 3 to 1 win, GB has a 2 all draw and I'm predicting the track meet score. I will try to post this each week, and who knows who else might be included in our weekly panel. Talk to you all soon!