There are several matches in Major League Soccer for Week 9, but one that I think will draw the most attention is out in Frisco, Texas on Saturday night. It's first place versus second place in the West as FC Dallas hosts the Portland Timbers in a showcase that features two of the better sides in MLS so far in 2017. FC Dallas nearly completed the trifecta of MLS honors in 2016 when they secured the Supporters' Shield for most points in the regular season and won the 2016 U.S. Open Cup in dramatic fashion over New England back in September 2016. FC Dallas was regarded highly going into the postseason, but their offense wasn't able to overcome the game 1 output posted by the Seattle Sounders FC in their 2 leg conference semifinal. FC Dallas did better in game 2, but their season was undone earlier than anyone associated with the team wanted despite the other successes.

The organization made it a goal to keep up the standard set in 2016, and so far, FC Dallas hasn't disappointed. What has been the bigger surprise is the defense, which has conceded just 3 goals in 2017 so far. While Matt Hedges and Walker Zimmerman have been very good, they've been supported well by their collective of backs in Atiba Harris, Hernan Grana, Maynor Figeroua and Aaron Guillen. Even Chris Seitz, considered a very solid MLS keeper over the years, has been splitting time with young Jesse Gonzalez and the defense under FC Dallas Coach Oscar Pareja has been simply stellar. The offense has fully fallen on the back of former Timbers striker Maxi Urruti, who signed with FC Dallas after the 2015 Cup season. But it hasn't been just him as holdovers Kellyn Acosta and Michael Barrios were joined by RSL castaway Javier Morales, and the offense is as potent and diverse as ever. The same could be said for Portland as they crew of Diego Valeri, Fanendo Adi, Darren Mattocks, Sebastian Blanco and Darlington Nagbe are currently leading the league in goals scored.

So in this match, what gives away first - the stellar defense or the potent offense. Portland's history in Texas only has yielded 1 win and 2 draws in 9 visits in the regular season, but we've seen Nagbe often be a big difference maker for the Timbers and he's currently on a roll. Here's what our crack group of prognosticators think for this one: 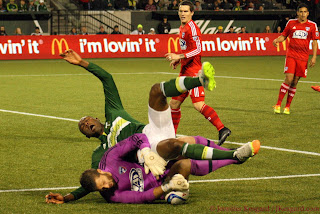 
Because this match is being played on my birthday, I can only expect a Timbers loss of even more epic proportions. The truly embarrassing part about this match is that all the FC Dallas goals will be Timbers own goals. However, the two Timbers goals will be own goals by Maxi Urruti. It doesn't quite even things out, but it does allow us to laugh through the tears.


Portland will be without Jake Gleeson and Diego Valeri for this trip. On the plus side, Fanendo Adi returns from suspension.
The forecast, 81°, thunderstorms with 89% humidity, won't help the Timbers at Toyota Park where they have won only once out of eight attempts in MLS. However, they're better off playing at this time of year rather than at the height of a Texas summer. Dallas will be a tough nut to crack. They are unseated in 2017 and have only conceded three goals in six games. I predict goals from both teams respective leading scorers, ex-Timber Maxi Urruti for Dallas and our own Fanendo Adi.


GB seemed very disinterested in the whole prediction thing this week. He was more curious about why he didn't get any of the hash browns that were for breakfast on Friday morning like the rest of the house. Even thought I had been asking him about this all week, he refused to provide anything except a "Eff off, human" response. He's still handsome, though.


Tortie seemed very interested once again as she was a bundle of eeps and meows about it. She kept looking away when asked about whether FC Dallas would win, but when we asked about Portland, she ran over and rubbed on a cardboard box. We interpreted that to mean there will be a key play that happens near or in the Timbers box. I kept track of the eeps and meows for her official score.


Spot was clearly upset that GB took her act over the last few weeks for the lack of a score, but perhaps we caught her in a better mood because she meowed and purred through the whole exercise. It became apparent that she's an Urruti fan, however, and decided that the former Timbers forward will score more than his old team.


I called for a draw on this week's episode of the Rose City Soccer Show, which is a first for me in 2017.  We will be seeing two extremely talented offenses on display, but FC Dallas has been simply stellar defensively as well with the Timbers improving, too. While I think the chances will be limited, the defenses won't come out unscathed and we'll have a draw for our troubles with goals from Nagbe and Adi for us & Urruti and Morales for the home side. Honestly, a draw there would be a great result.
at April 28, 2017