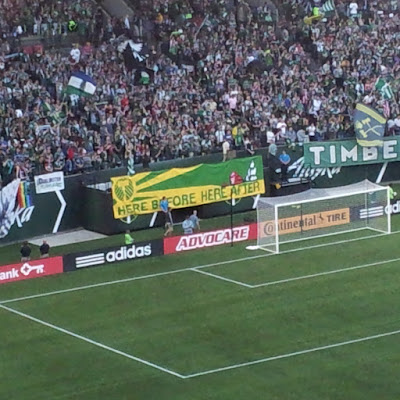 It's been a while since the Portland Timbers have been at Providence Park - officially 28 days since defeating the Colorado Rapids - but they haven't exactly been lying about either. While the Portland Thorns have secured a playoff berth in NWSL play and Timbers 2 have found some recent good form, the Timbers followed up their successful 2 match home stand with 4 points in 3 road matches - drawing in Seattle, winning in New York while losing to Real Salt Lake. The situation now is that with 4 matches left in the 2017 regular season, Portland sits tied in 2nd place in the West with Sporting Kansas City and the Flounders. The Timbers currently have the tiebreaker with overall wins at 12 with hosting Orlando, D.C. United and Vancouver while traveling to San Jose left on the schedule. Of the teams Portland faces, Orlando City and D.C. United are out of the playoffs in the East - Orlando is in ninth 7 points behind the line while D.C. United is in last place in the East. The Whitecaps are currently on top of the West by a point while San Jose is in fifth place one point ahead of a trio in sixth at 38 points - RSL, Houston and FC Dallas.

Portland has been a very good home side with 8 wins and 4 draws in 14 matches played, so having 3 of the last matches in the Rose City does give some confidence to them. While Orlando City is on the outside of the postseason hunt, they do have the satisfaction of having never lost to the Timbers in their only 2 meetings in MLS history - OCSC defeated the Timbers 2 to 0 back in April 2015 at Providence Park while they dismantled the Timbers 4 to 1 back in April 2016. Cyle Larin continues to be the focal point of the offense while Kaka, Carlos Rivas and Giles Barnes man the midfield, but many MLS observers were shocked by the midseason move that brought Dom Dwyer to OCSC from Sporting KC during the summer transfer window. Dwyer has started the last 4 matches for Orlando City, so their offensive potential could be seen as dangerous. Much like the Timbers, however, the OCSC defense led by Jonathan Spector, Scott Sutter and former MLS Timbers goalkeeper Joe Bendik has been erratic. Bendik's numbers haven't been terrible, but much like his counterparts Jake Gleeson and Jeff Attinella, Bendik has seen a ton of shots come his way. While their postseason dreams would likely require them to win out and get some help for qualification, Orlando City would love nothing more than to dent the Timbers' postseason aspirations.

The Timbers have been buoyed by the news that Fanendo Adi is finally healthy and could see minutes in this match, but they've watched their other playmaker, Diego Valeri, enter the 2017 MLS Most Valuable Player discussion. Valeri now sits just 1 goal behind NYCFC forward David Villa in goals scored with 18 goals and is now the sole owner of another record as he has scored a goal in 8 consecutive matches for Portland. We have witnessed the Maestro elevate his play to unseen levels in his MLS career, and the Timbers are benefiting from pulling together at just the right time. It hasn't been solely due to him, however, as the defense has rebounded from the debacle in Toronto to only concede 4 goals in their last 5 matches as Attinella has settled into the starting goalkeeper's job. Whether we see Gleeson return at some point, Portland is ecstatic to have Diego Chara back from his suspension for accumulation to join David Guzman in the midfield. Liam Ridgewell also returned from injury to start versus RSL, meaning the Timbers have been as healthy now as they have been all year. Only Marco Farfan's lingering ankle and Gbenga Arokoyo's season ending injury remain as concerns, but with the recent play of Zarek Valentin, Vytas and Roy Miller, the Timbers have been more consistent defensively recently and it couldn't come at a better time.

With a nation wide audience joining via Fox Sports 1 and the first match at home in a while for them, what do our crack staff of soccer experts think will happen this Sunday? Let's find out, shall we?


The soccer gods at 538 have the Timbers at 60 percent probability to win this game, 20 percent for a tie and 20 percent chance that Orlando parades into Providence Park and marches away with 3 points.

Well, I am going to put away the in-depth analysis, their defense is porous, but there are too many crappy things happening. For this reason, it is time for a feel good night in Portland. The Timbers may roll in like the eye of a hurricane and bunker down and wreak havoc.

They are too nice to do that. I feel a taking care of business 3 - nil win. Asprilla with a header, and Nagbe with something spectacular. Adi comes in late and trickles one in while Blanco will get a yellow.


Lucy is very demonstrative when she predicts soccer matches, but honestly, she's loud when doing anything. The screams about goals came ringing from the cat room as Lucy pondered the thoughts for the weekend, but she gave two loud meows for both sides. This indicates that both sides will get something for their troubles, but the home side won't be too happy about the result. Lucy is really sorry about this predictions, but she saw the writing in the kibble.

On current form the Timbers should just be strong enough to get their first win against Orlando. The lost 2-0 at home in 2015 and got thumped 4-1 on the road last year.

The good news is that Fanendo Adi is likely to see minutes off the bench after a 3 month layoff through injury. The bad news is Sebastian Blanco is on yellow card away from a one game suspension.


Pilot hasn't been much of himself as he was battling an eye infection followed up by dry eye, but he was very willing to provide his thoughts on this match. For Portland, it was 3 very loud mews while Orlando only received one before he ran off to use the litter box. Perhaps he knows something.


GB is still very much a Portland kitty as he's lived here his whole life, but when asked about goals for the Timbers this weekend, he clammed up and said nothing. He did mew 3 times for the visitors, however, so he's thinking the purple guys are going to win. Once he gave his thoughts, he proceeded to take a nap, so apparently he's confident in this prediction.


The interview for Tortie's thoughts turned out to be another crazy torrent of meows and eeps. I lost track of her noises when asking about the Timbers because she was so excited about there being lots of goals, but she definitely eeped more for the home team in terms of goals. One of these days, the crazy predictions just might turn out right.


Okay, she didn't pick a scoreless draw this week, but much like GB, Spot didn't think much about the Timbers or their chances against Orlando City. She went silent when asked about the Timbers and Diego Valeri continuing his streak of goal scoring, but when asked about the opponent, she uttered one single mew. I was shocked that she actually picked a score for once, so let's run with it.


Considering that both offenses can score goals and the defenses can be rather random, Moya's thoughts about this match don't actually sound that off. She didn't give any indication about who will score for Portland, but just meowed out 7 times for the home side. She also meowed some for the visitors, but since she did more for the Timbers, we'll give her some slack for this one.


As good as the Timbers have been over the last few weeks - the result in Salt Lake as a small exception - they have yet to beat Orlando City. In both meetings, the Timbers have been beaten rather handily. With Orlando City having several offensive weapons available, it's a surprise that they've struggled so bad until you look at their defense. Since neither team's defense will light the world on fire, I'm picking the Timbers simply because they've been in better recent form. And yes, Diego continues the streak for another week.
at September 22, 2017